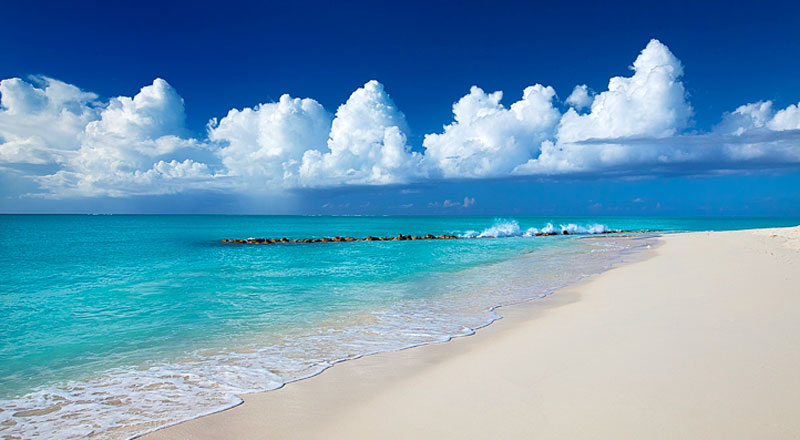 There are numerous condo/hotels located on the beach at Grace Bay providing accommodations ranging from basic to exceptional luxury. Club Med and Beaches (a family oriented resort by Sandals) provide all inclusive accommodations for those who prefer an all inclusive vacation. The luxurious Aman Resorts operate the Amanyara Resort at the North West Point of Providenciales. There are also numerous private villas which are available for weekly vacation rentals in Providenciales.

The Turks & Caicos Islands lie almost midway between Miami and Puerto Rico within the Eastern Time zone. The Island’s language is English and the official currency is the United States dollar. The Islands have direct dial telephone, Email and fax service to and from the Islands.

Marinas are available and the Island’s coastline is considered among the best for deep-sea fishing and scuba diving. The beaches are fine coral sand, clean and white in color.

FirstCaribbean International Bank, an amalgamation of the Caribbean Branches of Barclays Bank PLC, and Canadian Imperial Bank of Commerce has 2 branches in the Turks & Caicos Islands providing standard retail banking services. Royal Bank of Canada and Scotiabank also have branches in Turks and Caicos Islands. There are also several private banks. There are several brokerage firms with offices in Providenciales.

In 1976 a new Constitution was granted to the Islands creating a Ministerial form of Government.

A Governor appointed from Whitehall acts as the Queen’s representative and is responsible for internal security, external affairs, defense and certain judicial matters.

English Common Law is the underlying law of the Turks and Caicos Islands as modified or supplemented by Ordinances passed by the Legislative Council of the Islands.

Amongst the Ordinances aimed at attracting new Companies are:

This Act, passed in 1981, provides for the following types of Companies.

The Confidential Relationships Ordinance of 1979 applies not only to the banking business, but also to all businesses of a professional nature, including brokers, accountants, attorneys and even government officials and employees.

The Ordinance is extremely comprehensive in its definition of secrecy and confidentiality. Severe penalties, including heavy fines and imprisonment, can result from convictions of offenses to this law.

There are stamp duties on property transactions and import duties on goods brought into the Islands.

For additional information on the Turks & Caicos please fill out the form below.